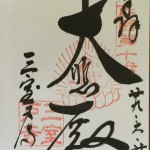 We went to Mimurotoji-temple in Uji City, Kyoto. The Buddhist temple was built by order of Emperor Konin about 1,200 years ago. The temple is also famous for hydrangea (Japanese hydrangea).

We reached Mimurotoji-temple by taking the JR line from Osaka station to Uji station through the Kyoto station for about one hour and using a taxi for about 10 minutes.

The temple halls of the Buddhist temple are built on the mountainside, and we walked from here.

The bridge on the lower left side in this picture is “Jataibashi bridge” (snake bridge), and tradition says that a snake shadow appears when rain falls. 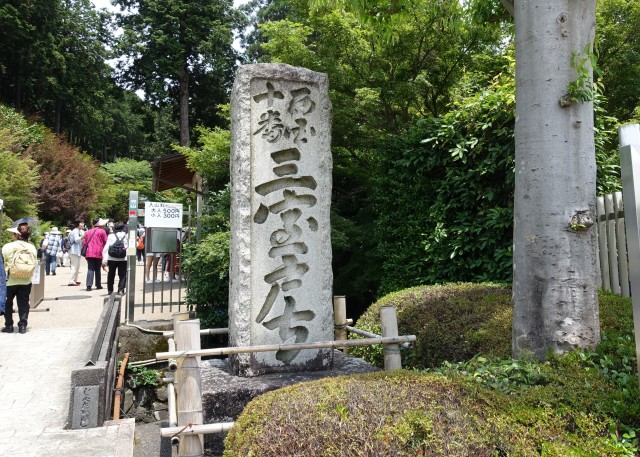 This is the hydrangea garden of the Buddhist temple visible from the approach to the “Sanmon.” 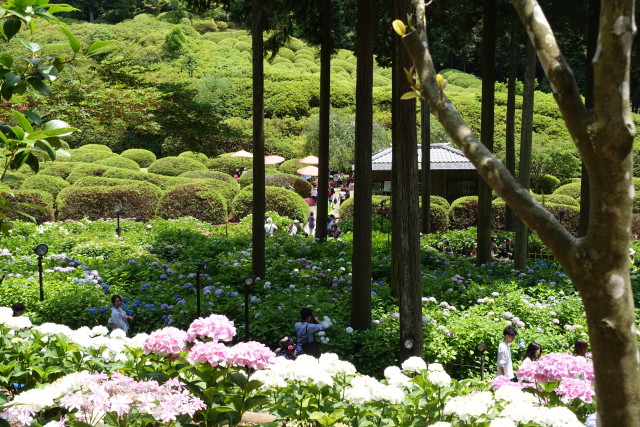 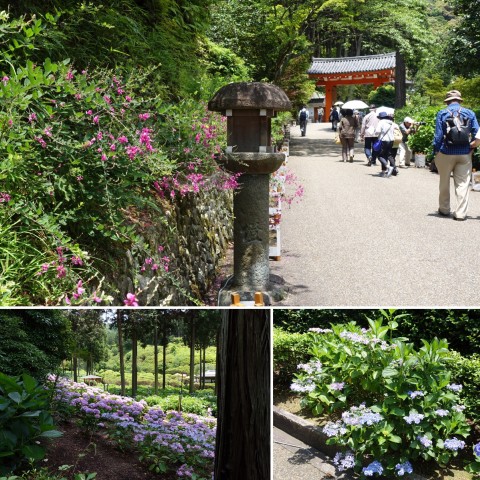 This is the “Sanmon” (entrance gate of the Buddhist temple). 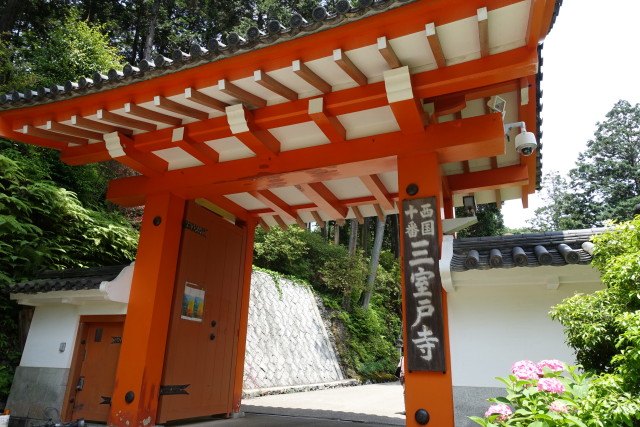 Passing through the “Sanmon,” we saw a large stairway. There are temple halls when you go up to the top of the stairway. 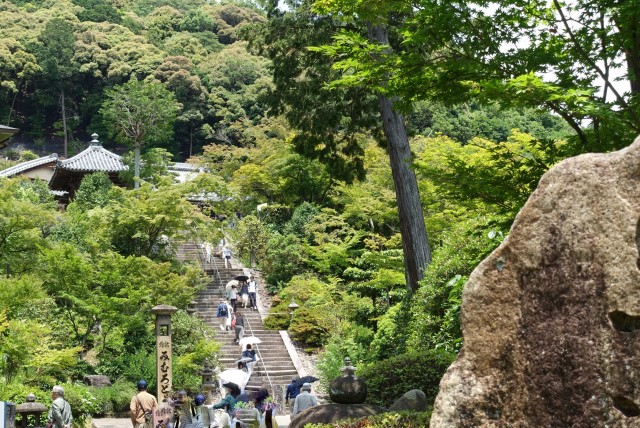 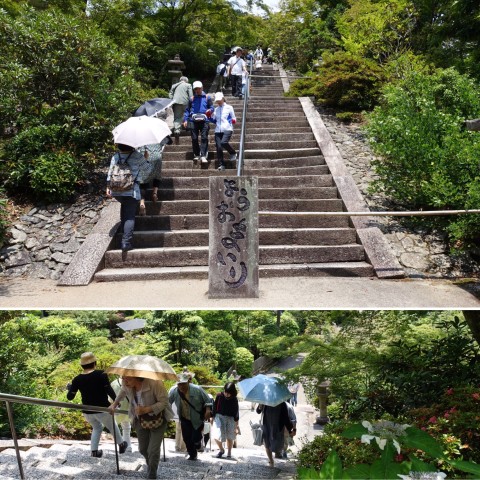 This is “Ugajin,” a Snake God, which is also called “Komahebi” (guardian snake) just next to the stairway. 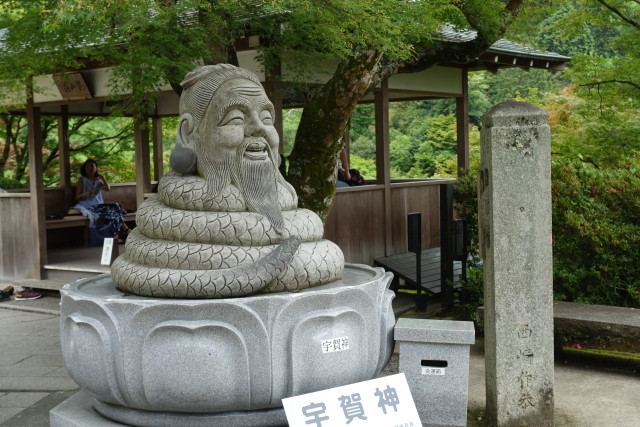 This is Chozuya at which you purified yourself by washing your hands and mouth. “Fudomyoo” (Acala) was placed in the Chozuya. 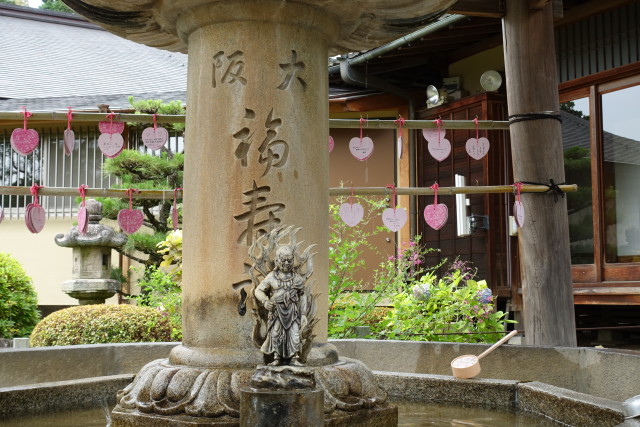 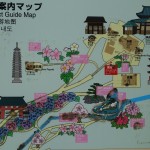 This is the Hondo, main hall, which was rebuilt in 1814. The hall appears blackish as a whole and gives a deep impression to us. There were a lot of pots in which lotuses were planted in front of the Hondo. In this main hall, “Senju Kannon Rituzo” (standing statue of Guanyin with 1000 eyes and 1000 hands) is enshrined, but it is a hidden Buddhist image, even its photographs are not published. 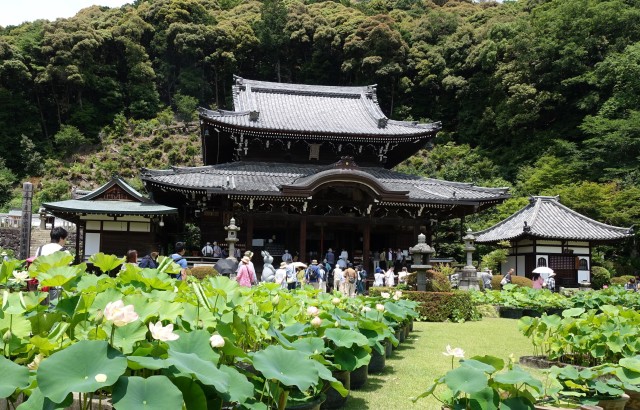 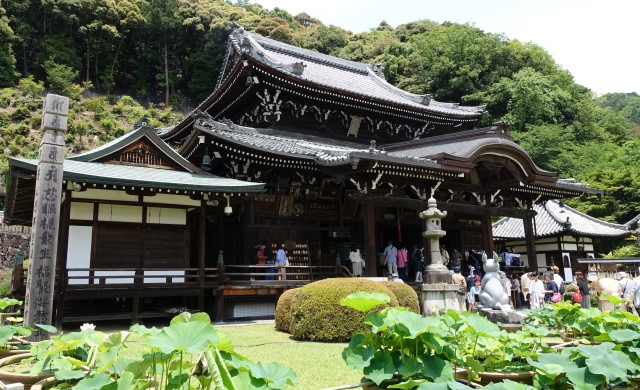 Lotus flowers. How sweet they are! 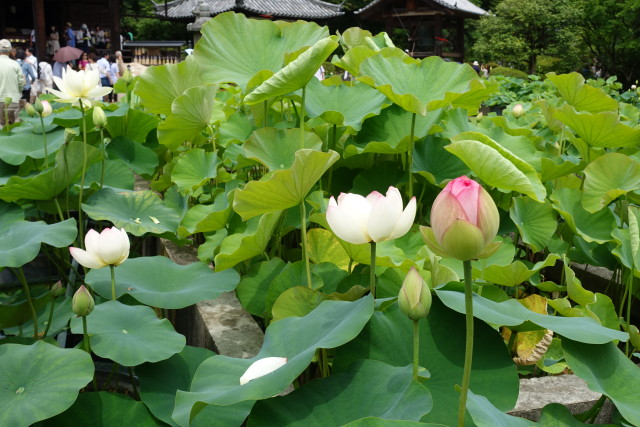 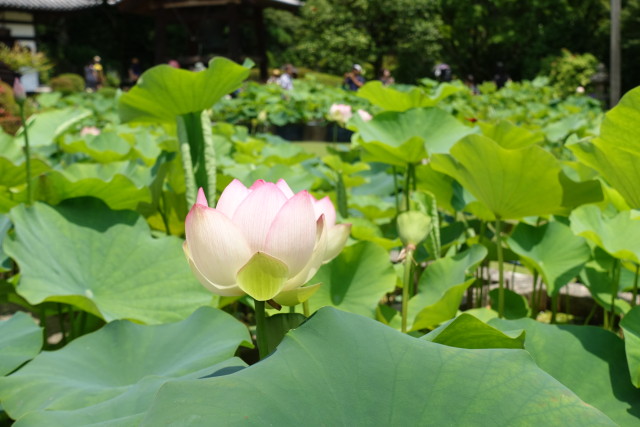 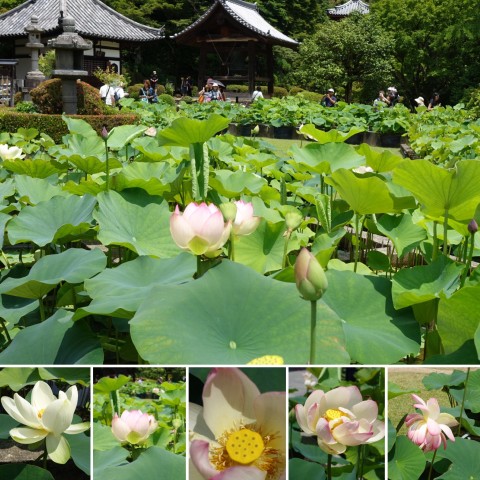 The Koma-ushi (guardian bull) and the Koma-usagi (guardian rabbit) were located in front of the “Hondo.” 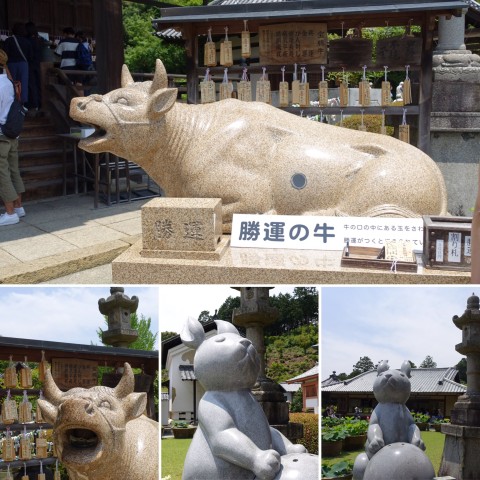 There is the “Amidado” (temple hall containing an enshrined image of Amitabha) on the right side of the Hondo. There was originally a grave of Shinran‘s father, and this “Amidado” hall was built on the grave. 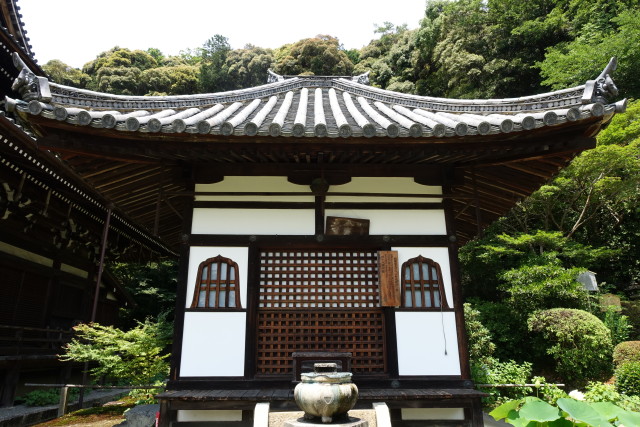 The “Shoro” (bell tower) stands on the right of the “Amidado” hall. Anybody can toll the bell. 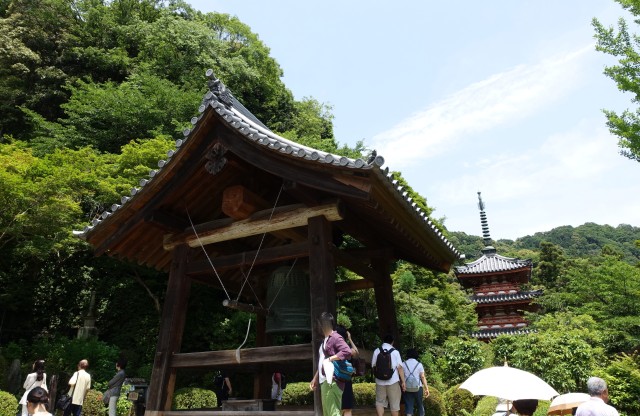 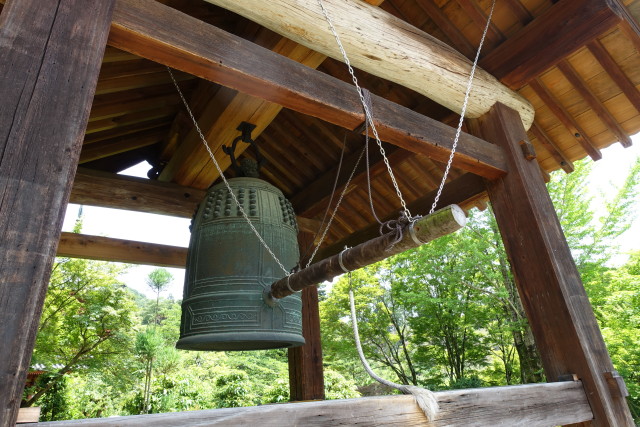 This is the “Sanjuto” (three-storied pagoda). 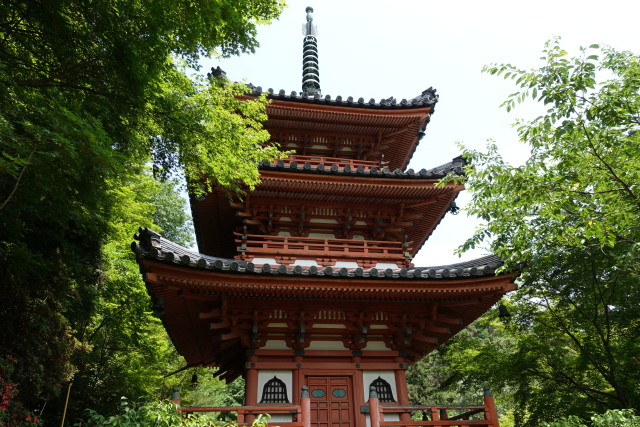 At a glance, you can look out over the “Hondo,” “Amidado” and “Shoro” and “Sanjyuto” from the precincts. 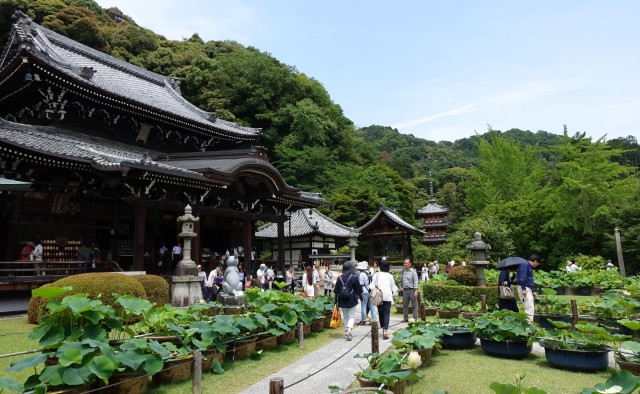 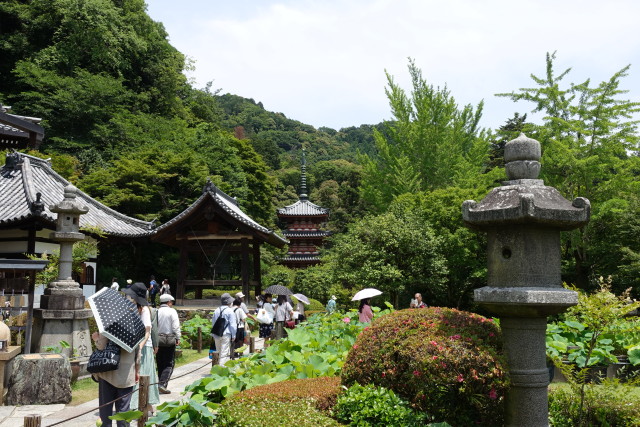 Going up the stairway on the right of the “Hondo,” we saw the “Isoha jinjya” shrine. 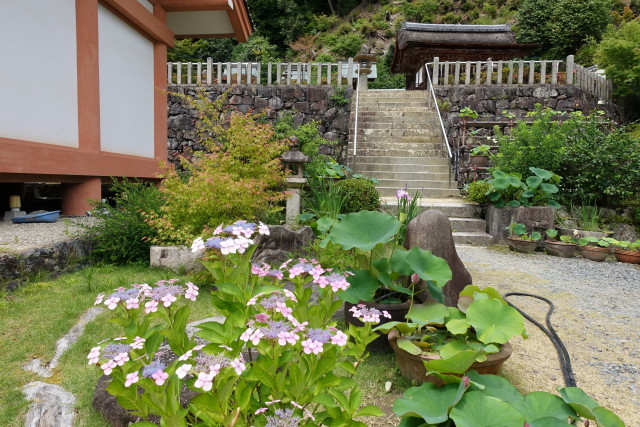 This Shinto shrine is designated as a national important cultural asset. 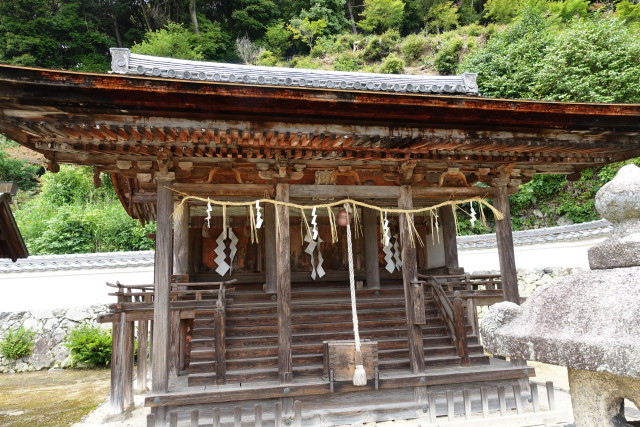 There is a stone lantern in front of each shrine.  The lantern has a square hole. The four parts on the right side of this picture show shrines looking through the holes. 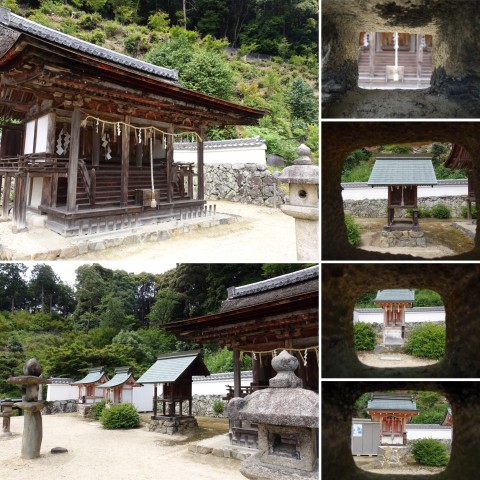 Going down from the precincts, we reached a rock garden. 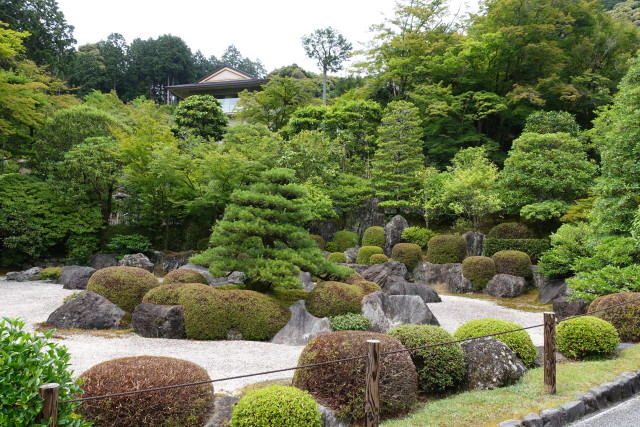 The rock garden leads to a pond. 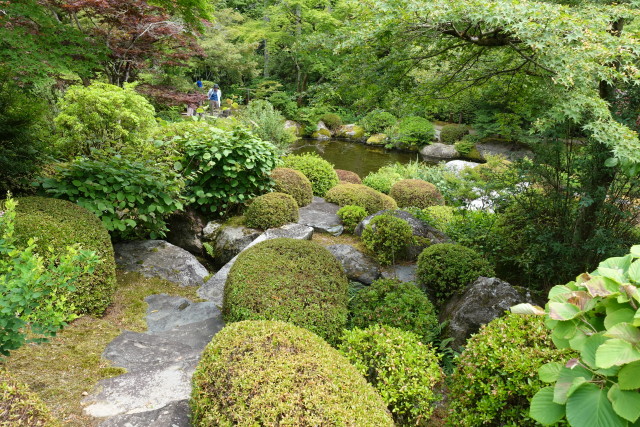 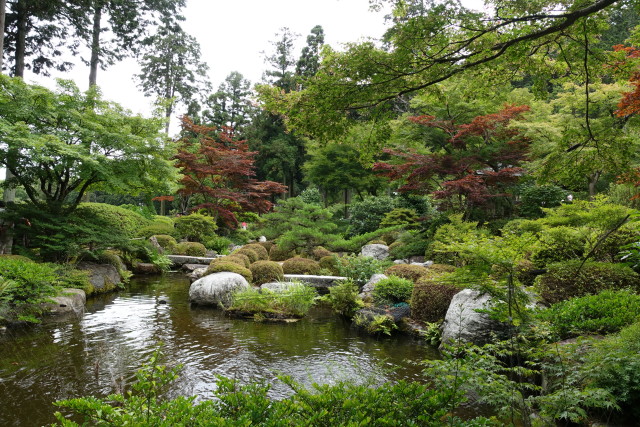 Next, we went to the hydrangea garden.