After we left the “Tofuku-ji” Temple, we had lunch at one of sub-temples of the “Tofuku-ji.” The sub-temple serves vegetarian food at the lunch time only in the autumn color season. 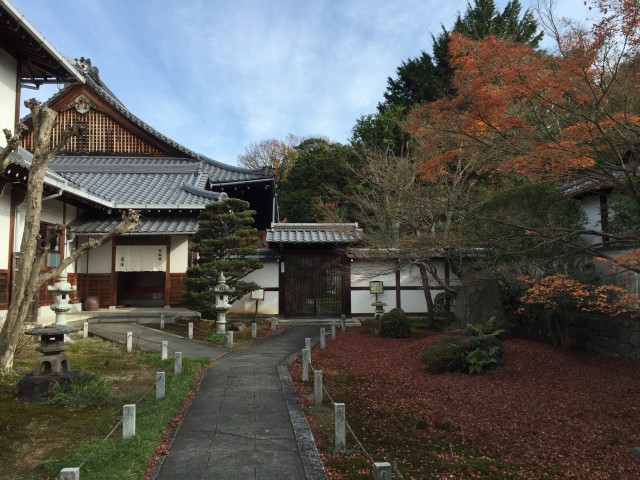 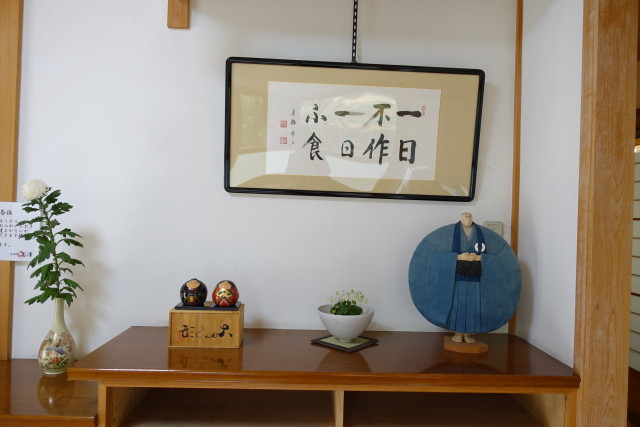 The sub-temple had a small but charming garden. 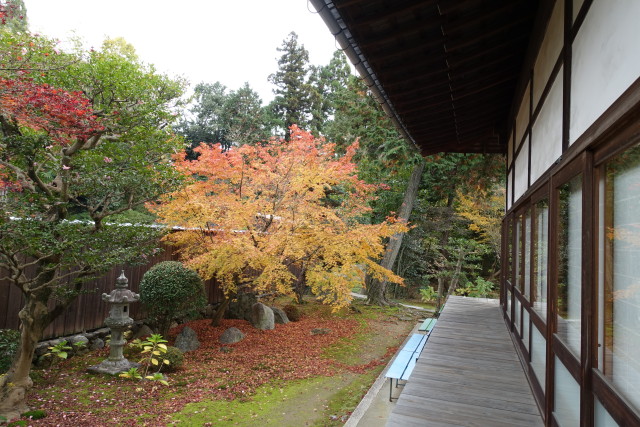 The next goal was “Unryuin” Temple in “Sennyu-ji” Temple. The “Sennyu-ji” is a temple of the Shingon Sect of Buddhism. It was built in Kamakura Period (1185 – 1333), and is connected with the Japanese Imperial Family, having imperial mausoleums.

This temple, as well as the “Tofuku-ji” Temple, are big temples, whose lands are on one mountain, and so the lands are wide and have height differences. 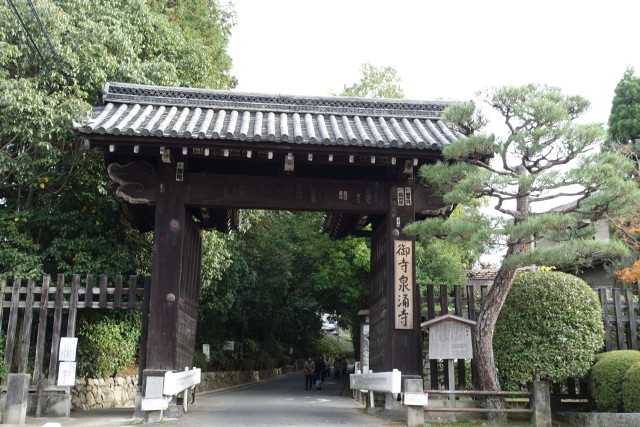 The “Unryuin,” at which we aimed, stood at the innermost site of the “Sennyu-ji.”

There was a red bridge, which is an entrance of a sub-temple of the “Sennyu-ji,” called “Imakumano-Kannonji,” in the land of “Sennyu-ji.” 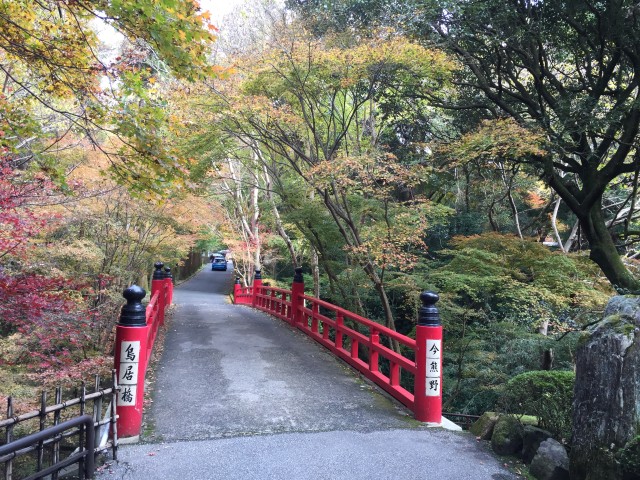 This is the “Butsuden (Buddha hall)” of the “Sennyuji,” seen at the foot of a slope. 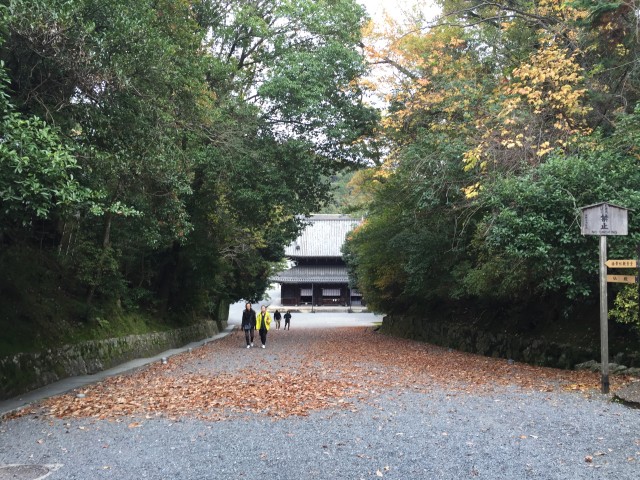 The “Butsuden” and “Honbo (a residence for the chief Buddhist priest)” that you can see the building having a white wall in the back. 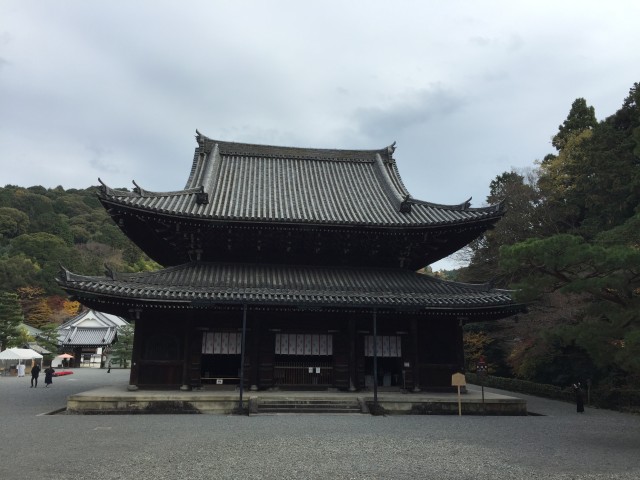 The “Butsuden” on the right side, and “Sharidenn (Reliquary Hall)” on the left side. 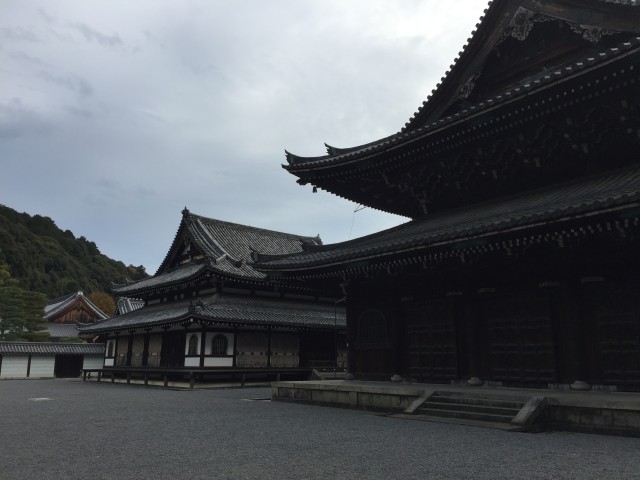 “Gozasho (a place where the Imperial Family uses).” That day was fine, but the “Sennyu-ji” is in the mountain, and so the daylight was fading and it gradually became dark even at around 3 o’clock. It also got cold. 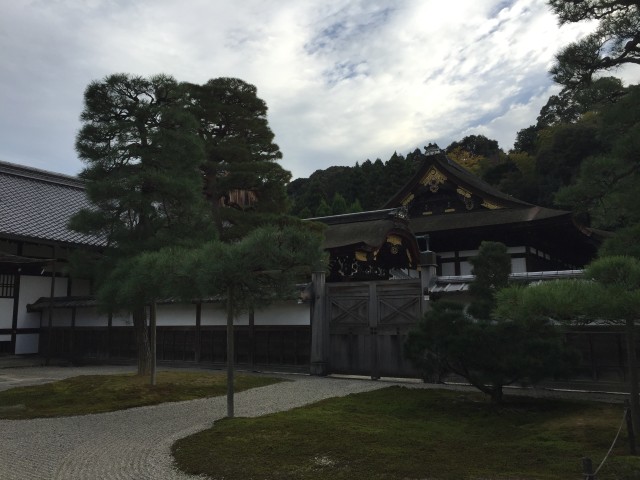 We finally reached the “Unryuin.” It took about 15 minutes from the “Daimon.” 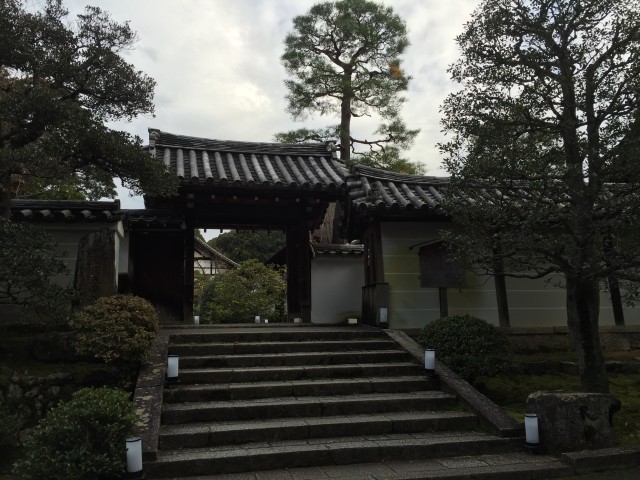 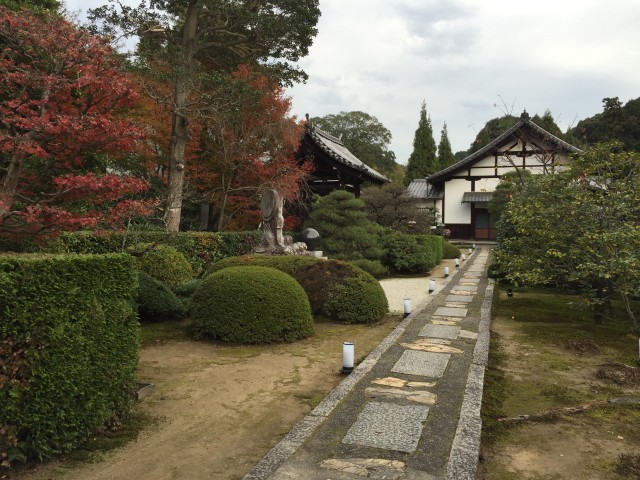 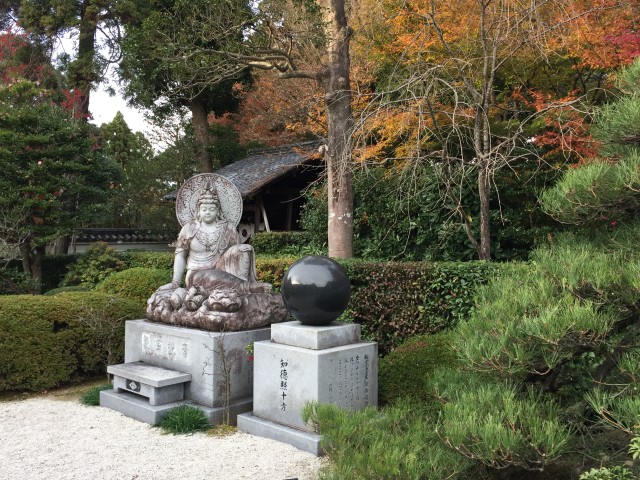 A sumie or suibokuga (black-and-white ink painting) at the entrance drawing of a dragon on clouds. The temple’s name is “Unryuin” and the Sumie is an “unryu-zu” in which “un” is cloud and “ryu” is a dragon. 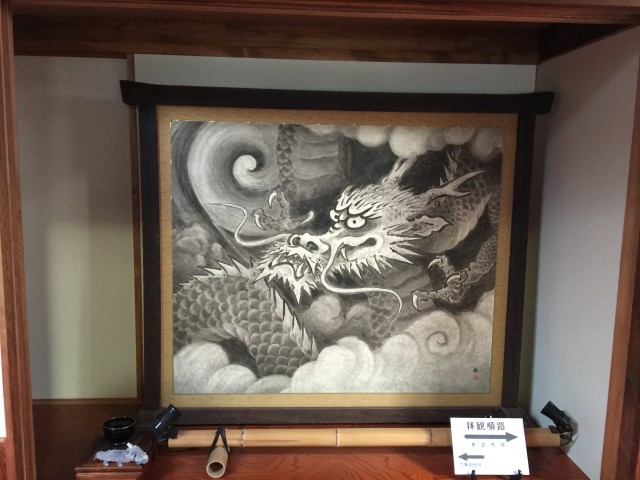 “Satori no Mado” (the window of enlightenment). 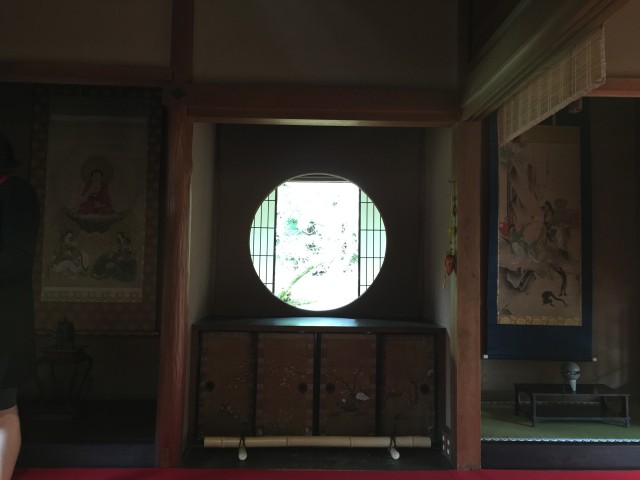 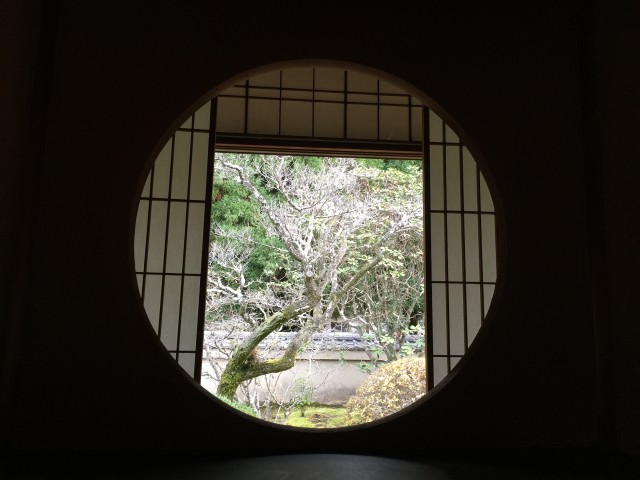 The garden seen from a space between shoji screens. 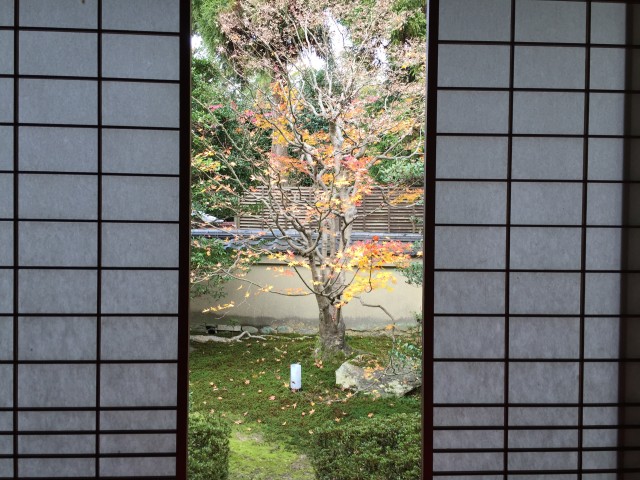 We had “wagashi (Japanese-style confectionery)” and green tea in this room. 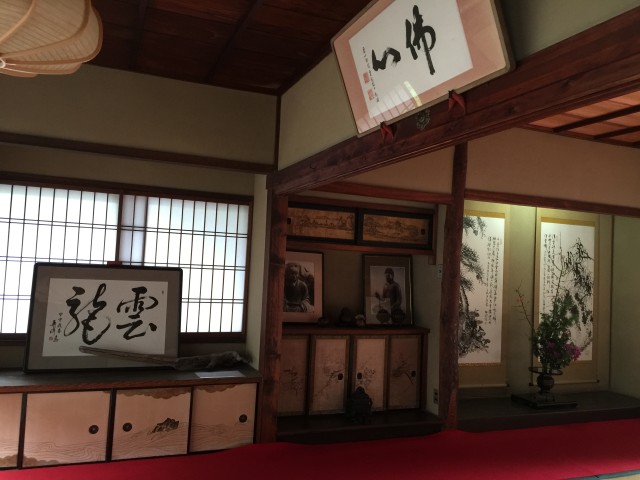 You can get a tea service in this room, while gazing at this garden. 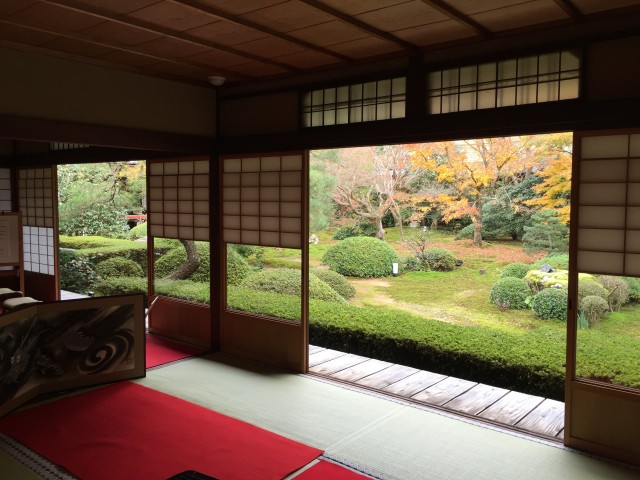 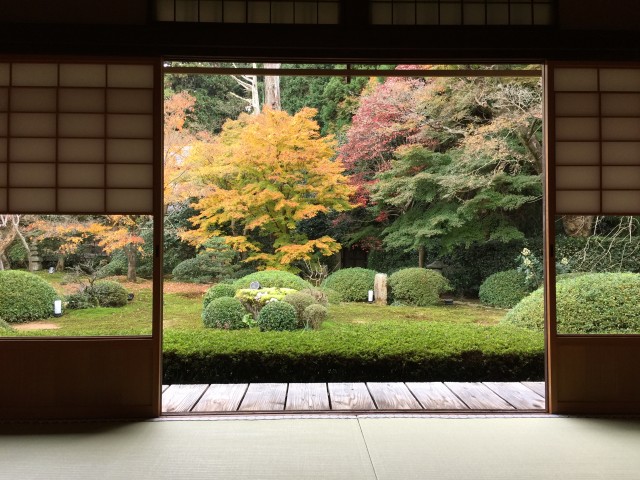 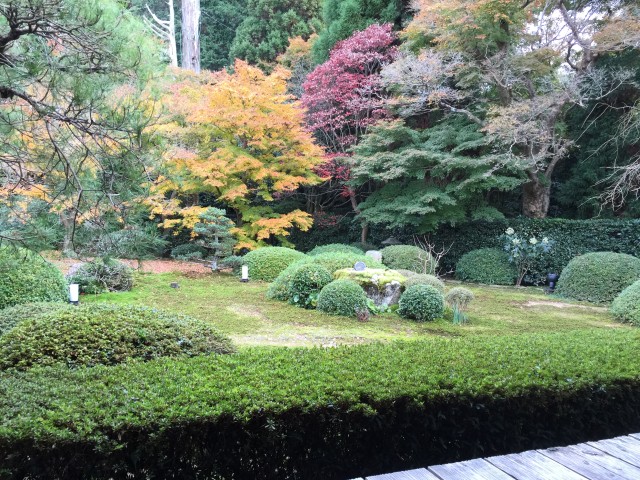 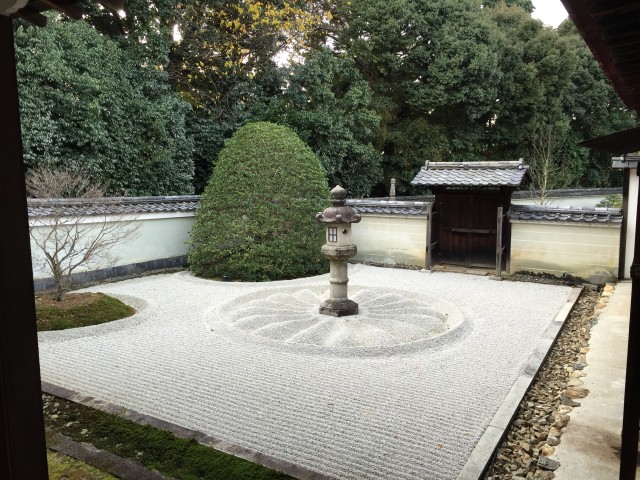 These are “Kakejiku (Japanese-style hanging scrolls).” Riddles are written on the scrolls.

We went there on November 30, and so we missed the best time to see the colored leaves. There were many trees whose leaves had fallen. Indeed, the scenery was not very flashy, but was tasteful and sober. We were fully satisfied.